We started off our tour with a visit to Wat Na Phra Men. Much of this temple remains in it’s original condition from when it was built in 1503. This is one of few temples that was not destroyed by the Burmese during the war.

Our next stop along the tour of the old capital was Wat Mahathat. This temple was built in 1374 and was once considered the spiritual center of the city.

The third stop of the day landed us at Wat Phra Si Sanphet. This was the location of the royal palace from 1350 to 1448. Later in 1448 King Borommatrailokanat order a Wat to be built here. After his rule his son ordered three chedi’s to be built. One chedi’s held the remains of his father, another his brother and the last held the remains of King Ramathibodi the second. 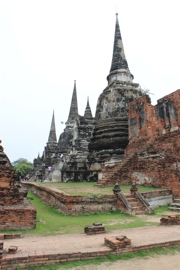 Our final stop of the day was at Wat Chaiwatthanaram. This temple was constructed in 1630 by king Prasat Throng as a memorial to his mother place of residence. It was used as a place for religious ceremonies and was also the place where many prince an princesses where cremated.