On our second day in Cape Town we had tickets to tour Robben Island, the prison where Mandela spent over 25 years alongside other political prisoners. We had learned a lot about Robben Island in the movie ‘Invictus’ and also on TV during the World Cup. Previous prisoners give the tours and it’s said that they add a unique and highly personal side to the tour. However, the tour was cancelled, apparently due to weather and the severe rains the day before. We were disappointed but were able to book tickets for the next day.

We decided to drive south to what is known as Cape Point, a large peninsula containing the Cape of Good Hope. The Cape floral region is considered to be one of the richest and most diverse in the world. It encompasses less than half a percent of Africa’s land area, but contains over 20% of its flora. The drive along the coast was beautiful, with waves crashing along the rocky shore and creating a mist that shrouded the coastline.

We were anxious to spot our first baboons. Jeff had seen a show about the ‘friendly’ baboons, and I’d heard stories about them stealing purses and jumping into cars. We first spotted a group of about 10 of them in the road, where they were playing and running around to the delight of the tourists trying to snap their pictures. We were disappointed that we did not get many good pictures, but these would not be the last of the baboons that we’d see. 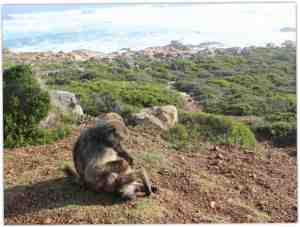 We drove to the Cape of Good Hope and hiked to the top, where there were striking views of the Atlantic coastline and the southernmost point of Africa (Cape Agulhas). We saw many more baboons, including a few mothers carrying their babies on their backs on their bellies. We next proceeded to Cape Point and hiked to the lighthouse, where a group of high schoolers were singing in what I believe was Afrikaans. When I asked what they were singing I was told it was the national anthem. It was very neat and all the tourists were clapping along and taking video.

After leaving the cape we proceeded to a jackass penguin colony (that is really their name!) at Boulders Beach. These are small penguins, standing about 18 inches tall. There were many fluffy brown baby penguins that haven’t yet grown their characteristic black and white fur.