We visited two more wineries on Sunday and were able to do a cavern tour at one of them. The speciality wines from SA are pinotage and natural sweet wines. We’ve bought a total of 9 bottles of wine here, so we either have a lot of drinking we need to do or some packing logistics to figure out before we head back to the States.

We departed Stellenbosch and drove through the pretty vineyards of wine country toward the ocean. We headed to Hermanus, reputed to have the best land-based whale watching in the world. We arrived after dark, so we woke up early Monday to hike along the ocean cliffs and try to spot some whales. We were not disappointed! We were lucky to spot four different whales, and at a proximity you could never achieve on a boat due to the restrictions limiting how close boats can approach whales.

The bay in Hermanus is deep and warm, surrounded by high cliff walls that provide great viewing. The Southern Right Whale, so named because hunters preferred its high amounts of blubber and the fact that it floated when it was dead – making it the ‘right’ whale to hunt – comes to the warm waters off the south coast of Africa between May and November to have their babies. The Southern Right Whale was nearly hunted into extinction and although at one point there were 25,000 of these whales, their numbers dropped into the hundreds before a whaling ban was implemented in the middle of the last century. Their numbers now are around a few thousand. 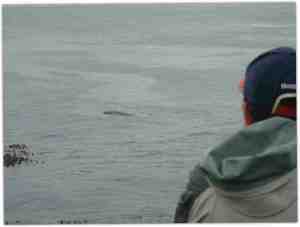