After an uneventful but long (~12 hour) flight to South Africa (SA), we landed in Cape Town, where it was pouring down rain. We rented a car and Jeff instantly adapted well to navigating on the other side of the road and shifting with his left hand. We checked into our hotel then headed to the Victoria and Albert waterfront to grab dinner and head to the game.

The waterfront had a great atmosphere, with tens of thousands of fans gathering to eat, drink and watch the early game between Japan-Paraguay. We amazingly found a table in a restaurant and enjoyed a nice dinner, then walked to the game. The path to the stadium was quite obvious; one could either follow the thousands of fans making their way there, or if one was not able to see, you could follow the sound of the vuvuzelas. 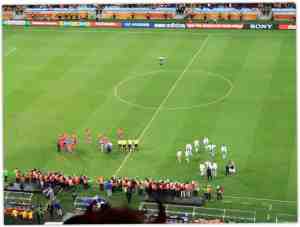 The game was so fun. It wasn’t quite as amazing of a match that I thought it would be, with Portugal looking rather lackluster, but it was still a great game and such a fun atmosphere, with crazy fans and vuvuzelas everywhere. The stadium was quite amazing, after undergoing a huge renovation for the World Cup.