We celebrated your first birthday today with a small party. Your birthday is next weekend but we will be traveling to Hilton Head that afternoon, so thought it’d be hard to squeeze in a party on that day. I made you a birthday banner like I did for your sister’s first birthday, and hung it up by the back door. We also got a dog pinata to honor your love of dogs, but it was too cute to fill it up and destroy it in the name of fun so we spared it and used it as a decoration.

You were napping when the party began, but woke up about 30 minutes into the party. I got you up and dressed and brought you outside, and you were relaxed just watching everyone. There were several older girls in attendance so they were running around and you were taking it all in, processing and learning. In just a little while you will be running around with them. 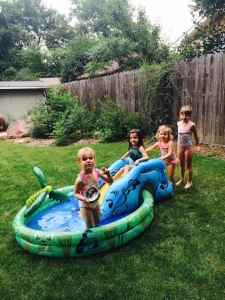 We had lunch and then dessert of cupcakes. You had your first cupcake, a flavor aptly called ‘Birthday Cake’. We all sang and you weren’t sure what was happening, you just looked around at everyone looking at you. Then you stared at the cupcake, gently stuck a finger in the frosting, and tried it. You must have enjoyed it because you went back for more, mostly eating just the frosting but eventually breaking apart the cake and eating some of that too. You were very serious and focused on eating, and were unfazed by the dozens of pictures we were taking. 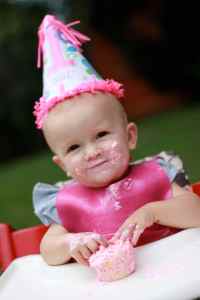 After we all ate you opened some presents – beautiful clothes and a fun toy – and then you had fun playing with water and chalk. Soon the party wrapped up and our family enjoyed playing and capturing some photos in the grass. It was a perfect, casual, low key party to celebrate you. 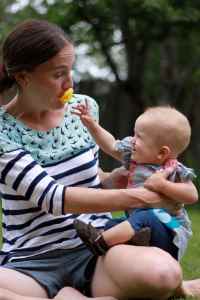